Here at the Jackson Hole Shooting Experience, we love our Ruger 10/22 Rifle options!  We have at least 4 ready for your use at all times, some with red dot sights, some with magnified crosshair reticule scopes and some with iron sites.  We have several variations of stocks as well.

From Wikipedia, the free encyclopedia with some edits:

The Ruger 10/22 is a semi-automatic rimfire rifle chambered in .22 Long Rifle. It has a removable 10-round rotary magazine which allows the magazine to fit flush with the bottom of the stock. Higher capacity magazines are also available. A magnum version, chambered for the .22 WMR cartridge, was made from 1998 to 2006, and a .17 HMR version, the 10/17 was announced in 2004, but was only listed in the catalog for two years. The standard version has been in production continuously since 1964.

The 10/22 was immediately popular upon its release. It was designed as a quality adult gun (with adult ergonomics) and not a cheap “youth rifle”. However, its easy handling characteristics, negligible recoil and inexpensive ammunition nonetheless make it ideal for young or inexperienced shooters. The Ruger 10/22 Rifle is very popular for small-game hunters and those who want an inexpensive rifle firing inexpensive ammunition for target and plinking use.

This popularity has led to many after-market modifications being available to improve performance, augment the rifle’s looks, or increase its magazine capacity, leading the 10/22 to be one of the most customizable firearms made. Custom manufacturers also make “clones” of the 10/22, which are similar in design (most parts will interchange) but built to much higher specifications and costs. The 10/22 barrel uses a unique two-screw, V-block system to attach the barrel to the receiver, making removal and replacement of the barrel (which would require a gunsmith’s work with most other rifles) very easy. This, when combined with the simple construction of the rest of the components, means that the average person can easily replace any part in the gun with nothing more than a screwdriver, a hex key and simple punches.

Variations of the Ruger 10/22 Rifle

The 10/22 is available in a wide variety of configurations. In 2015, the Ruger 10/22 came in 11 different models, not counting distributor exclusives. The Carbine came in 3 models, the Tactical, Takedown and Target each had 2 models, the Sporter and Compact each had 1 model. The discontinued 10/22 International model was fitted with a Mannlicher stock. Standard barrel lengths are 20″ in the 10/22 Rifle, 18 1⁄2” in the 10/22 Carbine, and 16 1⁄8” in the 10/22 Compact Rifle which is also fitted with a shorter stock. All .22 Long Rifle versions use an aluminum receiver, while the discontinued .22 Magnum version used a steel receiver with integral scope bases.

On March 28, 2012 Ruger introduced the 10/22 Takedown model. This model disassembles into barrel and action/buttstock components easily. It is shipped in a backpack style case that has room for the rifle, ammunition, and accessories. The MSRP is higher than the basic carbine models. The standard Takedown model has a brushed aluminum receiver made to resemble stainless steel and 18.5″ barrel with a black synthetic stock. Also offered in a black alloy receiver and 16.62″ threaded barrel with flash suppressor or with a threaded, fluted target barrel.

Model with 18.5″, alternatively 20″ or 22″, barrel and checkered walnut stock with sling swivels.

In 2009, Ruger released the SR-22 Rifle model, a 10/22 receiver embedded in a chassis that mimics the dimensions of an AR-15 style rifle such as their own SR-556. The SR-22 Rifle uses standard 10/22 rotary magazines, in addition to most aftermarket 10/22 magazines. The positions of the magazine release, the safety and the charging handle are all more similar to a standard 10/22 than an AR-15. The SR-22 Rifle competes directly with other AR-15 style rimfire rifles such as those made by Colt and Smith & Wesson. The SR-22 rifle boasts an aluminum handguard, adjustable six position stock, and a top receiver rail. Threaded holes on the handguard provide the customization of optional attachment rails. 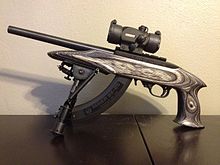 The 22 Charger pistol, first introduced in late 2007, is a pistol based on the 10/22 action. The 22 Charger originally came with a black laminated wood pistol stock with forend, a 10-inch (254 mm) matte blued heavy barrel, a bipod, and a Weaver style scope base in lieu of iron sights. Overall length is just under 20 inches (510 mm), making it quite large for a handgun. As it has an included bipod it is likely to be used from a shooting bench or table. The bipod attaches to a sling swivel on the stock fore-end, and is easily removable. Due to technical features, such as the magazine being outside the pistol grip, the Charger is not legally available in some U.S. states. The 22 Charger was later discontinued. It was reintroduced in December 2014, with a brown laminate stock with a M16A2 style pistol grip, 10-inch threaded barrel, picatinny rail, 15-round magazine and adjustable bipod. At the same time a “Takedown” model was introduced with a green laminate stock. Both models were later offered from September 2015 with black polymer stocks.

In 2014 to mark the 50th anniversary of the Ruger 10/22 a contest was held to design an anniversary model. The winning design by public vote has stainless steel receiver and 18.5″ threaded barrel with flash suppressor, a lightweight black synthetic stock with interchangeable stock modules, a picatinny rail and ghost-ring adjustable rear sight.

A limited edition 50th Anniversary Collector’s Series carbine model was offered in 2014. It had a black alloy receiver with “1964-2014″ special markings, 18.5” barrel, fiber optic sights and a 25-round magazine.

In 2009 Ruger also announced the Target Tactical Rifle model, a hybrid of the 10/22T and Ruger M77 Hawkeye Tactical rifle.

The AWC Ultra II version of the Ruger 10/22 is integrally-suppressed and features a shortened barrel. The sound suppressor encloses a ported stainless barrel and is made of 300 series stainless steel having a 1″ diameter which closely resembles a bull barrel. The barrel length is 16.5″ with an overall firearm length of 34 1⁄2” and the weight is 6 lbs. Due to the integral suppressor, this model is heavily regulated by governments engaged in the “End Gun Violence” propaganda battle.

The image on the bottom right shows two 10/22 carbines, the top one in issued form (with a 4-power magnification scope added, using the factory supplied scope base) and the bottom one in highly modified form. The modified target version includes an 18 inch bull barrel, a muzzle brake, a laminated wood silhouette style stock, and a scope with an illuminated reticle, in addition to internal modifications of the trigger group to improve the firing characteristics. See the entry on accurizing for more information on the reasons for these modifications.

A wide variety of aftermarket modification kits are offered for the 10/22, including conversions to bullpup configuration and cosmetic alterations to replicate the appearance of weapons like the M1 Carbine, Thompson submachine gun, AR-15, and AK-47. 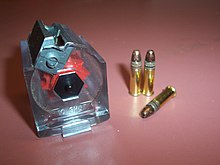 There are many types of magazines for the Ruger 10/22. The standard 10/22 ships with a black 10-round rotary magazine. Ruger has also produced a clear, polycarbonate 40th-anniversary edition 10-round magazine as well as a five-round rotary magazine (for states or countries that restrict magazine capacities). In 2011-2012 Ruger came out with the Ruger BX-25, a 25-round box magazine with a black composite frame and steel feed lips. Aftermarket options include 25-, 30-, and 50-round box magazines; 50-round teardrop-shaped rotary magazines, and 50- and 110-round drum magazines.

The standard 10-round 10/22 magazine stores the cartridges in a rotary fashion, rather than stacked, as seen in a box magazine. This allows the magazine to fit flush into the rifle without protruding from the stock at the natural balance point for one-handed carry. The action of the rifle strips a cartridge from the magazine with each shot, allowing the next cartridge to feed into place.

Not all Ruger 10/22 magazines are interchangeable. The owners manual for the 10/22 Magnum model states, “Do not attempt to use standard 10/22 magazines in the 10/22 Magnum rifles or load .22 Short, Long, or Long Rifle ammunition into the .22 Magnum. They will not function correctly and are unsafe to use in .22 Magnum rifles.” It goes on to say, “Never attempt to use .22 Long Rifle ammunition in Ruger 10/22 Magnum rifle magazines. The cartridges have a smaller case diameter and can split or burst when fired in the larger magnum chamber, releasing hot powder gasses and particle fragments out of the action at high speed, possibly resulting in injury to the shooter or bystanders.”

At the Jackson Hole Shooting Experience, we have learned that only the 10-round magazines function well, the larger capacity mags seem to constantly fail to feed, even with the CCI MiniMag ammo we use in our experiences.